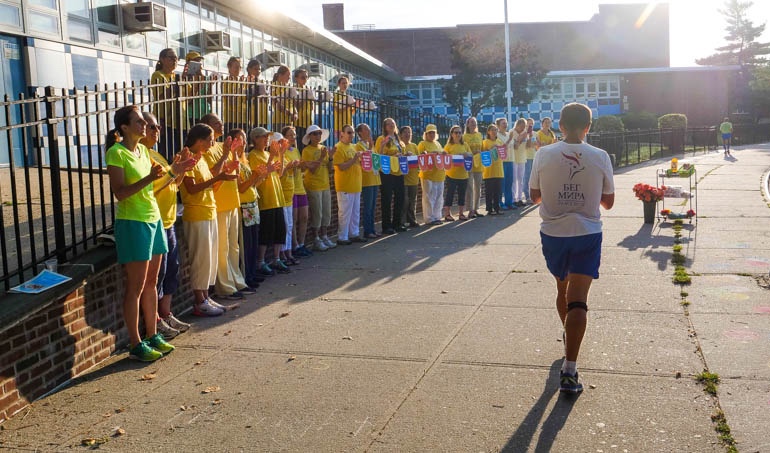 August 27, 2021 is the 90th birth anniversary of Sri Chinmoy. Some of his meditation students undertook projects as a tribute to what would have been his 90th birthday this year. I did some brainstorming and considered ideas like going for a 9 mile run ten times or writing 90 poems. I did write one poem about the birthday:

Ninety horizons
on an endless road.
Reaching down from eternity
with a clap and a cry
that summons
awake, awake
long slumber no more.
-Guru’s 90th birthday
poem by Sharani

I chatted with my good friend Julie who lives in Washington state and we were on the verge of picking out 90 songs to learn and sing together on Zoom when another acquaintance from the Sri Chinmoy Centre, Parvati, reached out to me about her idea – and presto Julie and I were embracing her project as the course of action to take.

The project is called 90 Days for 90 Years. Starting 90 days prior to Sri Chinmoy’s birthday anniversary this year, songs to learn and sing are posted to the website, devotionsongs.com. It is the inspiration of Parvati, the leader of a group of female singers named Enthusiasm Awakeners. The singing group was formed by Sri Chinmoy in December 1999 and he composed songs in English as their group’s repertoire. Over 8 1/2 years since their group formed, he composed a total of 1,582 songs. His larger musical body of work comprises a total of almost 7,000 English songs and over 13,000 Bengali songs. There were a number of singing groups formed by Sri Chinmoy including both local residents of the Sri Chinmoy Centre in Queens, New York and internationally as well. Many of the other groups learned and performed songs in Bengali rather than English.

Thus, starting on May 30th Julie and I meet on Zoom each night and go through the songs issued for that day – approximately 17 a day allows for doing all 1582 by the time of the birthday. The scores are posted to the website along with practice recordings to listen to for the sake of those who don’t read music well – that would be me!

Parvati wrote a piece about the group in Inspiration Sun in 2008. She states, “1,528 songs in eight years and five months. That averages to nearly
one song every two days. That amounts to a stunning amount of pure Grace. These short songs never cease to amaze me. Guru can say so much in 30
words or less. He can illumine, inspire, educate, sympathize, cause laughter, cause tears â€” all within a melodic minute. I can not adequately express how these songs have affected my life, I can only simply and honestly say that they have saved me.”

Here are a few that touched my heart deeply: