Fifty Freedom-Boats to One Golden Shore 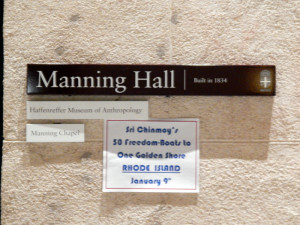 Ten years after his arrival in the West, Sri Chinmoy embarked on a 50 state American lecture tour, giving talks on spirituality at colleges and universities across the U.S. The first state visited by him in this cross-country venture was Rhode Island and the first lecture, entitled Thought Waves, was offered at Manning Hall, Brown University in Providence, RI on January 9, 1974.

Since today is the anniversary of that lecture at Brown University, now forty years later, I went to Manning Hall on the Brown campus after I got home from work.Â  I sat on the steps of this stately and magnificent building and looked out onto the campus green.

I proceeded to read aloud the lecture given by Sri Chinmoy forty years ago today. School is not in session right now so the environs were calm, quiet and cold! Despite the lack of an audience, I felt it was somehow important to observe this anniversary, itself falling in the start of 2014, the 50th anniversary year of Sri Chinmoy’s arrival in America from India.

As I read out loud in the night air, I tried to imagine what the lecture and meditation might have been like in 1974. At distinct moments I felt as if someone was behind me looking over my shoulder as I read. Entering into a meditative state even as I read, I also wondered if the university itself might be embodied with a soul/spirit that resonated with the deep wisdom expressed in the words I uttered.

I particularly liked the closing words of the talk which drew upon the image of a tree and leaves to express humanity and our interconnectedness. Sri Chinmoy writes,

And in the course of time, in either the near or the distant future, in the process of evolution humanity is bound to accept these messages. What is the essence of these messages? Love, love divine, which is the song of universal oneness. If we silence our thought-waves and listen to our heart-waves, we can spread the love-message of the Supreme. We can offer this love-message to the world at large, and we can sing the song universal to kindle the flame of aspiration in all individuals.

We are now conscious of the supreme Tree. We are climbing up the Tree. Eventually we can grow into the cosmic Tree and then we can watch the multifarious leaves, which are our brothers and sisters, grow and unfold. It is we, the seekers of the ultimate Truth, who can feed the inner hunger of these leaves of the supreme Tree.

Thought-Waves is now republished in a three volume compilation of university talks given by Sri Chinmoy entitled,Â The Oneness of the Eastern Heart and the Western Mind. Originally the lecture was published in

Fifty Freedom-Boats to One Golden Shore.