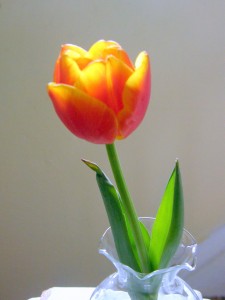 Did you know that some tulip flowers are officially named after someone or something? Examples include presidents, royalty or famous people.

There are currently over 3,000 varieties of tulips and the Royal General Bulbgrowers Association in the Netherlands keeps careful track of all the new hybrids with the International Cultivar Register of Tulip Names.

Sometimes an unnamed tulip receives the name of a person, place or thing recognizable to many.

Some of these tulips with famous and recognizable names can be found in Keukenhof, an amazing huge garden located southwest of Amsterdam in Holland (or the Netherlands), the modern-day tulip capital of the world. If you love tulips, this is a must see place to go. It is the biggest bulb flower garden in the world with 4.5 million tulips.

Over 44 million people have visited it and it is the most photographed spot on the planet. New to Keukenhof in 2009 is the “Walk of Fame” which features tulips named after people and things. There you can find tulips named after the band Pink Floyd, the Disney character Donald Duck, the famous Indian actress Aishwarya Ray, 4-time Olympic medalist Inge de Bruin, Ferrari, Prince Willem-Alexander and more.

My meditation teacher Sri Chinmoy is one of these notable people with a tulip named after him. The tulip is is an orange/red colour with a yellow edge on the petals. It was cultivated by Jan Ligthart and was officially inaugurated as the Sri Chinmoy Tulip on April 30, 2005 in Keukenhof in conjunction with the World Harmony Run arriving in Holland. The tulip is “permanently listed in the International Cultivar Register of Tulip Names” according to the official certificate received during the tulip’s inauguration.

I was lucky enough to purchase some of these Sri Chinmoy Tulip bulbs in order to plant them in the yard of my home and I have flowers blooming right now this April.

It took two years for me to succeed (squirrels are a big problem in my yard) but it was worth the wait. In 2008, I planted my first Sri Chinmoy tulip bulbs brought all the way from Holland by some of Sri Chinmoy’s Dutch students. I tried my technique that worked like a charm in previous years where I waited to plant the bulbs in early December to thwart the squirrels from eating them. No charm this time – not a single tulip bloomed the following Spring.

So last Fall (2009) I switched it up and tried a different technique to protect the tulip bulbs from getting devoured by the squirrels. I put Shake Away granules to deter squirrels from coming around the area where they were planted. This time it worked! I have my first Sri Chinmoy Tulips blooming in my yard in Rhode Island. I would happily do a commercial for Shake Away, having used it to get rid of a mystery critter living under my shed and to get mice to move out of my house. But back to the tulip…

The tulip is quite stunning. I particularly like the way it looks like light is emanating from it when the sun hits it. For a tulip to look like it is giving off light is rather symbolic given that it is named after a spiritual teacher who dedicated more than 40 years of his life to helping seekers find divine light, truth and peace.

Here are some photos of the tulip: