Today March 20, 2013 is the first ever U.N. International Day of Happiness. I first learned about it when I attended Visual Happiness an art exhibit at the Queens Museum of Art currently running through March 24th in their Partnership Gallery. The exhibit pairs photography from various cultures across the globe with writings on happiness from the pen of artist and author Sri Chinmoy. Sri Chinmoy placed much significance on the importance of happiness, enthusiasm and a positive encouraging approach to life. Here is one of his poems on happiness that I particularly like:

Happiness in cheerful self giving
Is beyond compare.
It is the highest delight
That God has created for humanity.
Sri Chinmoy, Twenty-Seven Thousand Aspiration-Plants, Part 109.

In so many ways I feel that I learned about happiness from the example of both his life and his writings. Whether in the satisfaction that comes from self-transcendence, or the peace that comes from simplicity, or the innocent joy that comes from a child-like outlook and remembrance to laugh, learning meditation as his disciple included myriad approaches to make spirituality and happiness inseparable.
So “Happy Happiness Day!” and if you are feeling inspired to delve further into the subject of happiness, check out this new website jewelsofhappiness.com for articles on happiness, excerpts of a new audiobook edition of Sri Chinmoy’s book Jewels of Happiness and much, much more.

Sri Chinmoy believed that spirituality and physical fitness are meant to co-exist and mutually support each other to help achieve a well-balanced life. While he strongly emphasized the importance of prayer and meditation, he also participated in sports as varied as soccer, track & field events, sprinting, marathon running, tennis and weightlifting. He explains,

“I am also trying to show that the inner world has to be a source of inspiration to the outer world. They should not be like opposite poles—North Pole and South Pole. No, they have to be united. The body and the soul must go together.”
-Sri Chinmoy, Aspiration-Body, Illumination-Soul Part 1, Agni Press, 1993.

One unique and unforgettable expression of this joining of sport and spirit is a weightlifting series he named “Lifting Up the World with a Oneness-Heart“. Ever a visionary, he combined his gratitude, oneness and goodwill towards others with his weightlifting and lifted individuals overhead on a specially built apparatus as a way to honor them for their contributions to society. As one ascended the platform, singers would perform a song composed by Sri Chinmoy – a theme song as it were for these lifts. The lyrics are:

Lifting up the world
With a oneness-heart,
The Hour of God
And His Victory-Start.
Song-Flowers, Part 3

Over a period of almost two decades Sri Chinmoy lifted 8,000 individuals in this manner. This number is mind-boggling when you stop and think about how many of those lifts involved large amounts of total weight including the individual(s) and apparatus.

To actually experience being lifted overhead by Sri Chinmoy makes a lasting impression. Helen Hunt spoke about getting lifted by Sri Chinmoy during a recent appearance on the David Letterman Show. She speaks about it as if it happened yesterday when in fact it was almost ten years ago. Get a closer glimpse of what it is like to be lifted in this video featuring Helen Hunt and Desmond Tutu:

When a much loved pet passed out of my life recently, I took the advice of some trusted friends who suggested that I should contemplate how my life changed and what lessons came from sharing a part of myself with a sweet Siamese cat.

One result of that investigation left me with a sincere wish to pay it forward and see if there was a way I could share with other animals some of the love and acceptance that they often bring to the table.

Now I am privileged to interact with animals (in my case the preference is the feline variety) by sharing a little time as a volunteer at an animal shelter near my house and by fostering cats until they can get adopted with another organization that specializes in rescuing strays and neutering/spaying feral cats.

The people connected with these organizations, the RISPCA and the East Providence Chapter of the Volunteer Services for Animals, are the real quiet heroes with their self-offering on behalf of helpless animals. 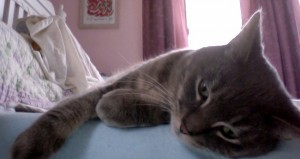 My personal inspiration was to see videos added to the descriptions to help get the animals adopted. Here is one video by yours truly showing a cat up for adoption named Claire that is the beginnings of this venture. And here is a picture of a little kitty I named Pixie Dust who I am fostering and may eventually adopt.

If we can help the helpless, then God will be so pleased with us and proud of us. These children are not getting a mother’s and father’s affection. But if somebody comes and says, “Yes, I may not be able to give you a mother’s or a father’s affection, but I will try to give you a little affection, then God is so pleased. At that time God’s divine Pride in you increases beyond your imagination. You are getting very, very special Blessings from Him. Again, it is He who has given you the opportunity, the capacity and the wisdom to help these orphans.

From about a month ago- our first big snow of the

Saw him while out running in the morning a few day